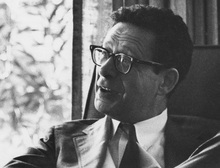 Harold Garfinkel
Conversation Analysis arose from the works of various sociologists in the 1960s at the University of California. The most prominent among them was Harvey Sacks. Inspired by the idea of Harold Garfinkel that in order to understand social behavior it was crucial to study and describe what people actually do, instead of just asking people to describe their own behavior (a field Garfinkel dubbed ethnomethodology), Sacks began to look at spoken interaction. While working in Los Angeles, he came to realize that talk might be highly organized, from the macro to the micro. One famous example he descbribes is the opening of a telephone conversation of a suicide hotline. The caller, instead of giving his name, claims a problem with hearing the employee's name. Sacks saw that this was a strategy for the caller to avoid giving his name, He also found that the best way to elicit the caller's name was not necessarily to task for it, because the caller could simply refuse or claim it was irrelevant. Instead, the call-taker could provide his own name, as there is an unspoken rule that when someone introduces themselves, you reciprocate that introduction. This orderliness meant that talk could be studied in a scientific manner. As was noted by J.L. Austin: talk is action, and human action is worth studying.

The time was particularly right for this type of work, because with the invention of cassette decks in the 1950s, it became easy to make recordings of conversations. One could now listen to the conversations more than once. No longer was research into talk-in-interaction dependent on fragmentary notes the researcher had made. It was possible to listen to the conversation over and over again, and thus to ground an analysis in the participant's actual behavior, not the analyst's impression of that behavior.

Emanuel Schegloff
Although the bulk of the credits rightfully goes to Sacks, he certainly didn't come to his ideas alone. As is typical of academic life, he discussed his ideas with his peers. He worked closely with Emanual Schegloff, and later Gail Jefferson. With them, he developed two of the most fundamental ideas about talk (there were plenty more of course, but I'll stick with two). First, that talk is sequentially organized into what they called adjacency pairs: two actions, one making relevant the next. A greeting making relevant a counter greeting, a question making relevant an answer, etc. Second, that the transition of turns between two participants in a conversation is organized according to a simple system. After one speaker produces a turn, s/he can give the floor to the other participant; if that doesn't happen, the other participant can self-select; and if that doesn't happen either, both speakers can start a new turn, Obviously, this order can be suspended or changed in certain circumstances, but for casual talk they generally hold.

The work began by Sacks, Schegloff, and Jefferson, was taken up by other sociologists as well. In the second half of the 1970s, we can find work by now famous professors such as Anita Pomerantz, who is now particularly known for her work on what is called preference organization – the idea that not all responses are equal, some are preferred and others are dispreferred, and participants design their talk accordingly. Others include Paul Drew, John Heritage, Paul Atkinson, and anthropologist Michael Moerman.
As language is the primary means by which talk is achieved, it should be no surprise that in later years linguistics got involved in Conversation Analysis as well. Linguists began to study the role of various linguistic phenomena in the organization of talk. Particular attention was paid to phonetics by such researchers as Peter French and John Local. Later on, syntax was also incorporated by Barbara Fox, Sandra Thompson, and Cecilia Ford. While the locus of their research was not so much on the social aspect of talk, their work continued, and still continues, to rely on the ideas put forward by Sacks, Schegloff, and Jefferson.

Austin, J.L. (1955). How to do things with words. The William James Lectures, Harvard University, Cambridge.
Sacks, H. (1972). An initial investigation of the usability of conversational data for doing sociology. In David N. Sudnow (Ed.), Studies in Social Interaction (pp.31-74), New York: The Free Press.
Sacks, H., Schegloff, E.A., & Jefferson, G. (1974). A Simplest Systematics for the Organization of Turn-Taking for Conversation. Language, 50(4), 696-735,
Schegloff, E.A., & Sacks, H. (1973). Opening Up Closings. Semiotica, 8, 289-327.
*For a more detailed description of the origins of Conversation Analysis, I refer to Schegloff's excellent introduction in Lectures on Conversation. Dutch speakers can also read the introduction to Mazeland's Inleiding in de Conversatieanalyse.
Powered by